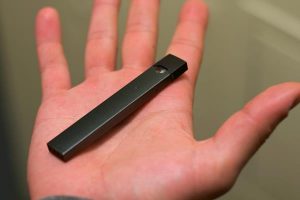 The discreet gadget called JUUL is little bigger than a pack of gum. Jon-Patrick Allem, research scientist at the Keck School of Medicine of USC, explores the intersection of social media and public health. His study of 80,000 tweets shows the JUUL vaporizer is widely used among high school, middle school and even elementary school students in the United States.

“We found young people talking about using JUUL on school grounds, in classrooms, in bathrooms, in the library, at recess and during gym,” Allem said. “JUUL vapors dissipate quickly, unlike the telltale cloud of previous e-cigarette ‘vaping’ devices, so it’s a way for kids to use nicotine undetected.”

Allem is lead author of the paper, which is a collaboration among scientists in USC’s Department of Preventive Medicine and Department of Computer Science. It was published this week in Drug and Alcohol Dependence.

Kids use Juul to “vape” at school without being caught

JUUL is a brand name for a new type of e-cigarette developed by San Francisco-based PAX Labs, Inc. The device consists of a USB flash drive-powered vaporizer that is easily concealed. Users insert cartridges called JUUL pods containing nicotine salts found in tobacco leaves. The device converts nicotine into steam that delivers a nicotine wallop; one JUULpod delivers about as much nicotine as a pack of cigarettes.

Pax Labs markets the device as a “smoking alternative” for adults trying to quit, but posts to Twitter show that minors use it to “vape” at school without being caught.

JUUL sales have been estimated at more than half of the U.S. e-cigarette market. PAX Labs, responding to early criticism from health advocacy groups, has positioned JUUL in its marketing campaigns and website (visitors must confirm they are 21 years or older) as a product to help adults quit smoking tobacco, which contributes to many diseases.

Are Juuls bad for you? Yes!

Nicotine use of any kind is known to be addictive and harmful to adolescent brain development. Allem said that in a sample of more than 80,000 posts to Twitter, about 1 in 25 mentioned using JUUL at school. Some of the tweets even link to videos of kids using JUUL.

“Despite JUUL’s branding as a smoking alternative, very few Twitter users mentioned smoking cessation with JUUL,” the study reports, observing that roughly 1 in 350 Twitter posts mentioned using JUUL to quit smoking, far less than posts about use at school.

The study was funded by a $40,000 grant (P50CA180905) from the National Cancer Institute and the FDA Center for Tobacco Products to determine the public’s early experience with JUUL and the social and environmental context of its use. The findings offer a cautionary note for parents and school administrators and teachers. The study suggests educators might need to learn how to spot JUUL use while administrators may consider installing vaping detectors on campuses.

Photo caption: The popular JUUL device allows users to vape discreetly and its use in teens is rising, says USC researcher Jon-Patrick Allem.