Unemployment benefits help some, but COVID-19 hits the disadvantaged hard 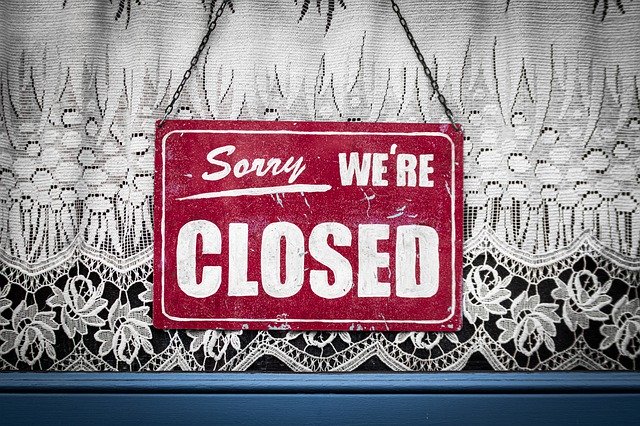 A new analysis of data from USC Dornsife’s Understanding Coronavirus in America Study reveals that while economic insecurity has increased overall among Americans who are newly out of work, those receiving unemployment benefits are significantly more economically secure than those who aren’t receiving benefits. Stimulus checks, however, have done relatively little to improve the personal financial security of the newly unemployed.

Newly out-of-work Americans receiving unemployment insurance payments put their chances of running out of money in the next three months at 20% compared to 37% among those who aren’t getting the benefit. And 8 out of 10 recipients of unemployment benefits who recently lost their job said they could handle a surprise expense of $2,000, compared to fewer than 6 out of 10 who aren’t receiving the payments.

As of the end of April, only 34% of those who lost a job since the start of the pandemic were getting unemployment assistance, while another 14% applied and were waiting for their first check. Roughly one fifth reported that they are ineligible for benefits, and the remainder were either waiting to hear, had been rejected or had not yet applied.

The one-time stimulus checks have helped recipients pay for smaller costs, but have done little to improve economic security for the newly unemployed. Receiving unemployment insurance payments is associated with a 23-percentage point increase in one’s ability to handle an unexpected expense of $2,000, while receiving a stimulus check is associated with only a 3 percentage-point increase. 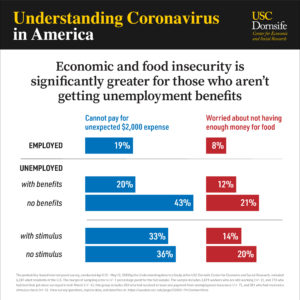 “Although any financial support is helpful, the steady income stream provided by unemployment benefits trumps a one-time check because it takes away uncertainty, which is a major source of stress,” said Arie Kapteyn, director of the USC Dornsife Center for Economic and Social Research (CESR), which conducts the Understanding Coronavirus in America Study.

Since mid-March, CESR’s researchers have been surveying a panel that has grown to about seven thousand adult residents of the United States regarding their perceptions and attitudes about coronavirus and how it’s impacting their lives. Graphic data from the study, supported by the Bill & Melinda Gates Foundation and USC, is updated daily and available to researchers and the public at: covid19pulse.usc.edu.

In Los Angeles, levels of economic insecurity have increased as a result of the pandemic and are substantially higher than in the rest of the nation. Among the newly unemployed, 29% of Angelenos are currently experiencing mild to severe food insecurity – 8 points higher than the national average. And only 58% of Angelenos say they could handle a surprise $2,000 expense, compared to the national average of 68%.

Angelenos are worse off now largely because they were in a more precarious financial position from the start.

“Prior to the pandemic the economy was booming, but economic inequality was also peaking — particularly in Los Angeles,” said Francisco Perez-Arce, an economist with the USC Dornsife Center for Economic and Social Research who studies the relationship between behavior and labor-related policy. “Many people had jobs, but a large percentage had low-earnings and little savings. These workers were the most likely to lose their jobs in the pandemic and the impact of job loss has been greatest for those who have no safety net.”

Of the 1 out of 5 Americans who lost their job during the pandemic, it’s the least educated and lowest paid workers who were hit the hardest.

The hit to those without a post-secondary education was equally severe. The rate of workers without a college degree who lost their job between March and April was twice the rate of those who graduated from college (27% vs. 12%).

Workers in the hospitality/dining/leisure industry were the most likely to become unemployed, with 4 out of 10 employees in this sector losing their jobs. The next hardest hit industry was retail, in which 3 out of 10 joined the ranks of the jobless, followed by the transportation industry, which shed a quarter of its jobs. 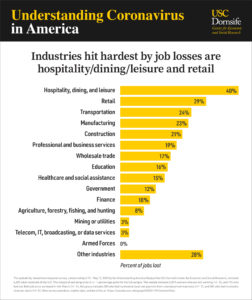 The probability-based internet panel survey was conducted by the Understanding America Study at USC Dornsife Center for Economic and Social Research. A total of 6,287 adult residents of the U.S. participated in this online survey from April 15 to May 12, 2020. The margin of sampling error is +/- 1 percentage point for the full sample. The sample includes 2,879 workers who are still working (+/- 2), and 773 who had lost their job since surveyed in mid-March (+/- 4); this group includes 203 who had received at least one payment from unemployment insurance (+/- 7), and 381 who had received a stimulus check (+/- 5).

The survey questions, topline data, and data files, and a press room featuring this release and other information are available at: https://uasdata.usc.edu/page/COVID-19+Corona+Virus. The analysis of L.A. County data is supported by USC Dornsife’s Public Exchange. Industry sector data courtesy of the Financial Health Network’s U.S. Financial Health Pulse 2020.