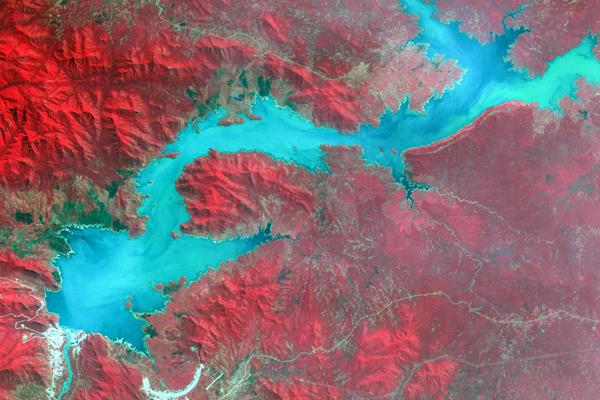 The new study describes potentially drastic water supply and economic impacts for Egypt under rapid-filling scenarios for the Grand Ethiopian Renaissance Dam on the Nile River. The USC analysis also offers solutions to help break deadlocked negotiations as the dispute goes to the United Nations Security Council amid threats of a water war in arid North Africa.

Rapid filling of a giant dam at the headwaters of the Nile River — the world’s biggest waterway that supports millions of people — could reduce water supplies to downstream Egypt by more than one-third, new USC research shows.

A water deficit of that magnitude, if unmitigated, could potentially destabilize a politically volatile part of the world by reducing arable land in Egypt by up to 72%. The study projects that economic losses to agriculture would reach $51 billion. The gross domestic product loss would push unemployment to 24%, displacing lots of people and disrupting economies.

“Our study forecasts dire water supply impacts downstream, causing what would be the largest water stress dispute in modern human history,” said Essam Heggy, a research scientist at the USC Viterbi School of Engineering and lead author of the study. “Averaging losses from all of the announced filling scenarios, these water shortages could nearly double Egypt’s present water supply deficit and will have dire consequences for Egypt’s economy, employment, migration and food supply.”

The study was published July 1 in Environmental Research Letters.

Despite the risks, the study offers policy solutions for sustainability that could potentially minimize the downstream impacts and reduce tensions in the Nile River region. For example, the impacts could be partially offset by adjusting operations at the Aswan Dam downstream in southern Egypt, pumping more groundwater, cultivating different kinds of crops and improving irrigation systems.

So far, despite international negotiations, there’s been little progress in the decade-long dispute.

Giant, new dam at center of the controversy

The crux of the controversy is Ethiopia’s $5 billion Grand Ethiopian Renaissance Dam nearing completion at the Nile headwaters. Now in the second phase of filling, it will be the largest hydropower project in Africa and would create a reservoir containing 74 billion cubic meters of water — more than twice the operational capacity of Lake Mead on the Colorado River.

It’s so vast that it will take years to fill, and depending on how long it takes, the water diversions could have devastating impacts downstream. Egypt and Sudan have water rights to the Nile, while Ethiopia was not allocated a quantifiable share. But as water and energy demand grows in the Nile River basin, Ethiopia is asserting its needs for hydropower and irrigated agriculture to promote development.

Some 280 million people in 11 countries in the basin depend on the waterway — a primary source of irrigation for more than 5,000 years. Egypt relies on the Nile for more than 90% of its water. The region’s population could increase by 25% in 30 years, increasing demand at a time when Egypt would expect less water from the Nile. Water rights along the Nile have been in dispute since 1959; today, the conflict threatens to escalate into a war.

The USC study examined various dam filling scenarios and water shortage impacts for Egypt. Based on the short-term filling strategies of 3 to 5 years, presently favored by Ethiopia, the water deficit downstream in Egypt could almost double; 83% of the additional water loss would be due to dam restraining flow and evaporation and 17% lost due to seepage into rocks and sand.

The study helps fill a gap in the dispute by reducing ambiguities about how dam filling scenarios would impact the water budget deficit in Egypt, as well as offering a feasibility index to the different potential solutions. As global warming and aridification accelerates, it underscores the need for more water research in arid lands, which is the core mission of the Arid Climates and Water Research Center at the USC Viterbi School of Engineering.

“There is a real need for sound science to resolve the ambiguity surrounding this controversy,” Heggy said. “Our analysis doesn’t point fingers, yet it shows a dire water situation that will result downstream, which is forecasted as the largest water stress dispute in human history. It can be avoided if proper support is made to the water, energy and environment research in the Nile basin.”

The study comes amidst a 10-year dispute between Egypt and Ethiopia over water supply on the Nile River. The parties seek an international solution, yet talks led by the U.S. State Department — and joined by the European Union and the United Nations — have resulted in little agreement after four years.

Meanwhile, tensions run high as negotiators try to avert armed conflict. Egypt has vowed not to allow the dam to impede its water supply, and it held joint military maneuvers with Sudan in May. Sudan and Egypt have since petitioned the United Nations Security Council to hold an emergency session.

The dispute is emblematic of wider disputes over water scarcity as climate change affects developing countries experiencing rapid growth. Disputes along the Mekong, Zambezi and Euphrates-Tigris rivers, among others, show the potential for political instability and conflict.

Heggy said it’s possible a win-win solution may yet be found for the Nile River, based on policy options the study identifies. Progress has been impeded, though, due to a lack of credible information about downstream water supply and economic impacts. Getting an agreement will likely require better data and forecasts on impacts to human society as well as ecological effects along the Nile River.

In addition to Heggy, co-authors of the study are Abotalib Z. Abotalib at USC and Zane Sharkawy at Cornell University.

The research was funded by the James H. Zumberge Research and Innovation Fund allocation to the Arid Climates and Water Research Center at the Viterbi School of Engineering.

Photo caption: NASA‘s Terra spacecraft shows filling of the Grand Ethiopian Renaissance Dam along the Blue Nile River is well under way near the Ethiopia-Sudan border.