Voters predict Trump’s reelection, but less than a third would be happy about it

Most Republicans are supportive of President Donald Trump’s influence on the party and the GOP’s move toward populism, and they are happily optimistic that he will win re-election in 2020, according to the latest poll. And while the vast majority of Democrat-affiliated voters would be unhappy if he won a second term, eligible voters gave Trump a greater than 50% chance of winning in 2020.

When asked about their wishes for the future of the Republican Party, 44% of all Republican-affiliated voters (including leaners) said it should be more populist, stressing strong borders, protecting jobs from competition overseas and standing tough against crime and social disorder. One in four said the GOP should become more traditionally conservative by focusing on fiscal responsibility, defense and pro-business policies. Another 13% said the GOP should stay as it is and 16% said they don’t know. 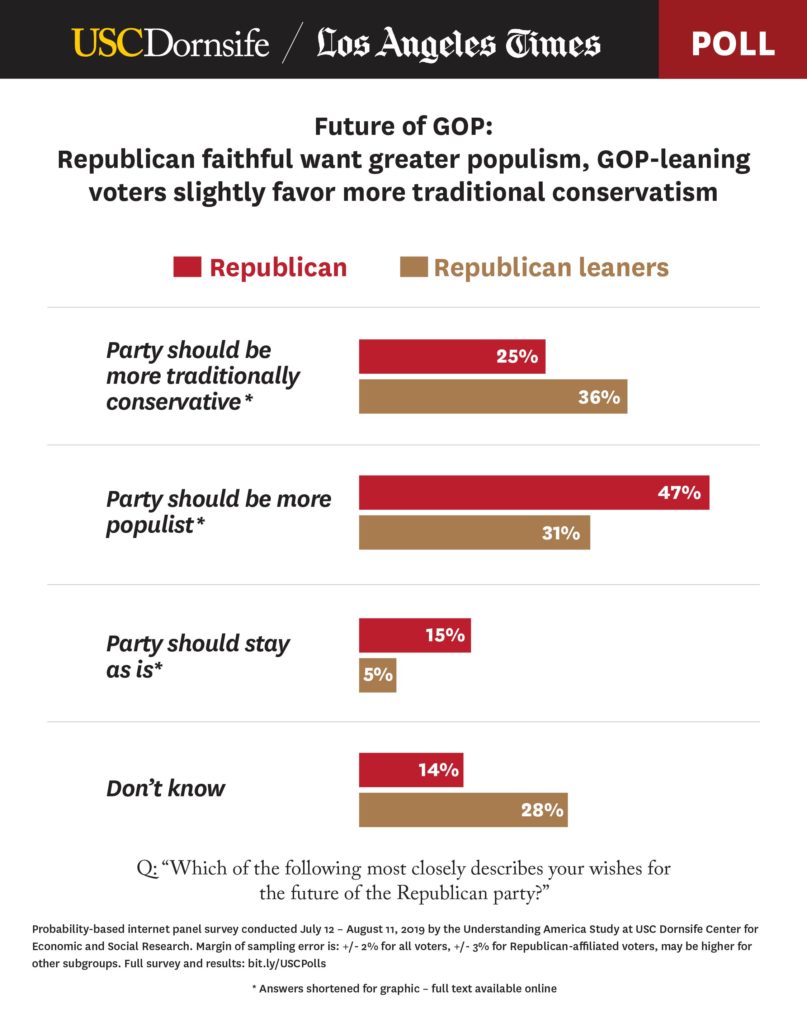 “Trump owns the Republican Party,” said Robert Shrum, director of the USC Dornsife Center for the Political Future, which oversees the poll. “That’s the bottom line of this. They like him, they like his direction. He’s got more trouble with people who might lean Republican but who might not be hardcore Republican.”

“One out of five Republicans and leaners would like to see President Trump have less influence on the party,” said Jill Darling, the poll’s survey director. “These dissenters tend to be college educated, younger and only loosely affiliated with the party, but the majority voted for Trump in 2016 and he may be in trouble if they don’t come out to vote for him again.”

The poll shows GOP-affiliated voters with college degrees split between a preference for conservatism or populism (40% to 37%), compared to those without college degrees, who prefer populism by more than two-to-one  (47% to 21%). Support for the populist path was higher among Republican affiliates in rural (48%) and suburban (46%) areas, versus 39% of city dwellers.

“I don’t know if populists are pushing Trump or if Trump is strengthening the populists,” said Mike Murphy, co-director of the USC Dornsife Center for the Political Future. “There is no question that the dominant force in the party is Trump-style populism.”

Republican-leaning voters were split, slightly favoring a more traditional conservativism (within margin of sampling error), with 36% saying the party should be more traditionally conservative; another third (31%) prefer a more populist approach and 28% say they don’t know. Five percent of the GOP-leaning voters say the party should stay as it is.

Murphy said the poll brings a question into sharp focus: “Will suburban Republicans and college-educated white independents who are uneasy with Trump swallow the bitter pill of re-electing him, or the very bitter pill of voting for a very progressive Democrat if Joe Biden loses Iowa, New Hampshire and the nomination?” 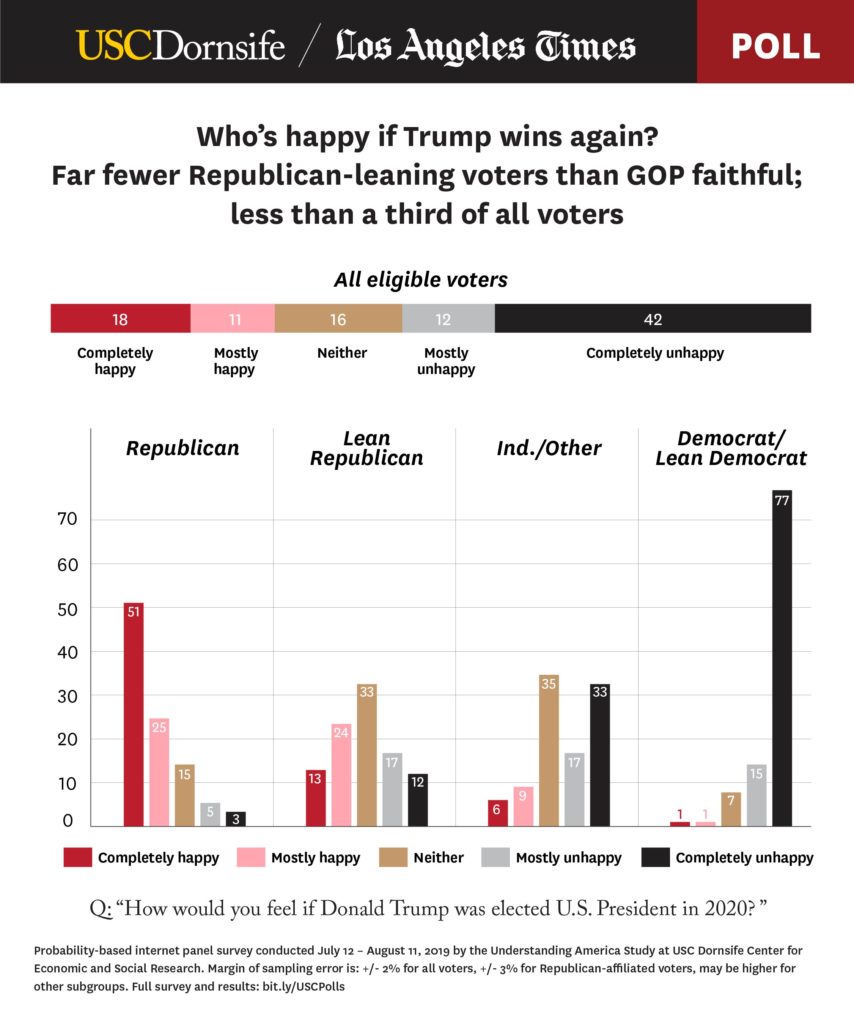 An overwhelming 9 out of 10 affiliated Democrats said they would be completely or mostly unhappy if Trump wins again.

“This poll says buy Valium stock,” Murphy said. “One huge chunk of the country is going to be really unhappy if Trump wins and another huge chunk will be unhappy if the Democratic nominee wins. We are so polarized now that it’s ‘I’m right and you’re evil.’” 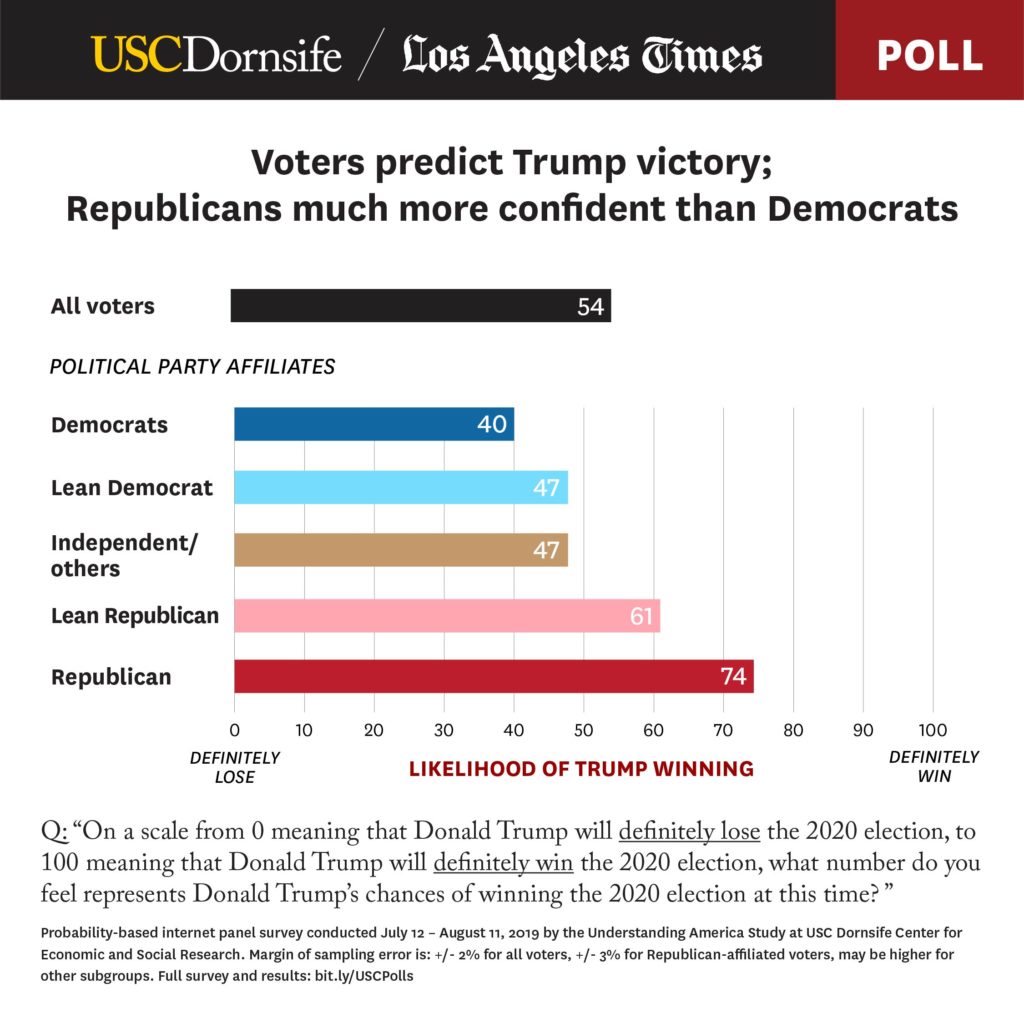 All eligible voters were asked to rate on a scale of 0 to 100 how likely it was that Trump would win the 2020 election. On average, all voters rated their confidence in a second term for Trump at 54 out of 100.

Republicans rated their confidence in Trump’s re-election at 74 out of 100, compared to the average of 40 among Democrats, indicating a 60 percent likelihood that the Democrats believe that their yet-unchosen nominee will win.

“Having worked in the Democratic vineyards for years, I will tell you that Democrats are classically ‘the sky will fall’ people,” Shrum said. “They worry and worry and worry.”

The poll was conducted online in respondents’ choice of English or Spanish. The overall margin of sampling error is +/-2 for all eligible voters and +/-3 for Republican-affiliated voters.

To arrange an interview with experts about the poll, please contact Emily Gersema, (213) 361-6730 or gersema@usc.edu