Where are the women in sports? Not on TV – a survey of news media finds they’re ignored more than in 1989 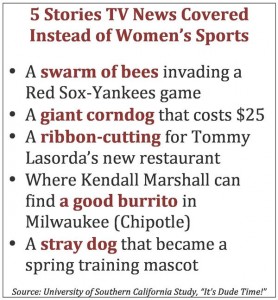 A USC study of TV news media has found that coverage of women’s sports has barely budged in a quarter-century, despite dramatic increases in the number of girls and women playing youth, high school, college and professional sports.

The survey of Los Angeles broadcast affiliates and ESPN’s SportsCenter reveals that coverage is actually lower than it was in 1989, when the study was first conducted; it has been conducted every five years since then.

When it began, women rarely appeared, except to be portrayed as sex objects or the butt of a joke. Over time, that overt sexism has been replaced by a general absence of women altogether: women’s sports are rarely covered, and when female athletes are interviewed in any depth, it’s to portray them as mothers or girlfriends, including to stress those roles over their role as an athlete.

At the same time, men’s sports coverage of the Big Three – football, basketball and baseball – has increased. The study found broadcasters devoted 74.5 percent of their time to Big Three coverage, up from 68 percent when coverage was assessed in 2009. Big Three sports coverage continues well into the off-season, continuing storylines about teams and players even when there are no actual games being played.

The study’s title – “It’s Dude Time!”:  A quarter century of excluding women’s sports in televised news and highlight shows – is a reference to a hockey clip found during the course of the research. In light of the dearth of coverage of women’s sports, the sports announcer’s exclamation prompted the research team to ask: “When is it not ‘dude time?'”

“It really demonstrates the unevenness of social change,” said Michael Messner, co-author of the study and a professor of sociology and gender studies at the USC Dornsife College of Letters, Arts & Sciences. “We’ve had this incredible explosion of girls and women going into sports in the last 40 years, and we’ve seen some improvement in the last 10 years in live TV coverage of some women’s sports, like college basketball. What’s puzzling to us is that the increased interest and participation in women’s sports has not at all been reflected in news and highlights shows.”

The news is also delivered differently. Sports announcers, famous for their boisterous, colorful commentary, seem to rein in their humor and enthusiasm as soon as female athletes are onscreen. Their delivery then becomes flat.

The way the news was delivered is as troubling to Messner and his colleagues as how rarely it was delivered at all. Airtime is precious, and a 30-second spot goes a long way in connecting viewers with the storylines happening within a particular sport or league.

The following is a list of stories that broadcasters chose to feature instead of women’s sports:

Though broadcasters have made admirable attempts to diversify their reporting teams in terms of race, gender has been overlooked. In the 2014 study, women made up less than five percent of sports anchors and 14.4 percent of ancillary sports reporters.

“With this research, we are trying to get women’s sports on the radar not only for fans, but for generations of girls and boys,” said study co-author Cheryl Cooky, associate professor of Women’s, Gender and Sexuality Studies at Purdue University. “Seeing women’s sports through the same lens as we see men’s would go a long way in shifting the cultural perceptions of gender roles and expectations.”

Messner and his colleagues don’t expect 50/50 sex equality overnight. There are simply far more men’s sports leagues than women’s in general, so it makes sense that there would simply be greater representation of male athletes overall. But the fact that coverage of men’s Big Three sports so utterly dominated news coverage is problematic.

“These shows,” Messner said, “function as a sort of ‘mediated man cave’—a place set up by men for men to celebrate men’s sensational athletic accomplishments, while for the most part ignoring women’s.”

The study recommends a few practical benchmarks that would be signs of progress.